There is no history of mankind, there are only many histories of all kinds of aspects of human life. And one of these is the history of political power. This is elevated into the history of the world. – Karl Popper

What kind of history did you learn at school? A series of dates, linking one thing after another as reign succeeds reign, president after president, battle followed by battle? Was the history you studied, as Karl Popper says, seen as primarily what happened in the world of political power?

But is that history? It certainly is an old fashioned kind of history, taught without much comment until fairly recently, and lampooned in such brilliant books as 1066 and All That which promises ‘103 Good Things, 5 Bad Kings, and 2 Genuine Dates’.

It was, by and large, the history that I learned in the 1980s at my Essex primary and secondary schools. I remember a few side trips, particularly at primary level, for building models of Anglo-Saxon villages or exploring the fascinating biographies of highwaymen. That last was because, living near Epping Forest, our local folk heroes and inspirers of pub signs were Sixteen String Jack and Dick Turpin. These entertaining lessons, though, were understood to be the light relief to the serious learning about the Corn Laws and Treaty of Versailles. Political power was seen to be where things really happened.

So it is refreshing to look at that kind of history face on and declare it inadequate. My favourite novelist, Jane Austen, did this as a teenager at the end of the eighteenth century. Her own satirical History of England is told unapologetically ‘By a partial, prejudiced, &ignorant Historian’. And in case you haven’t woken to fact that she is about to land a blow on the usual proceedings of historians, she adds ‘N.B. There will be very few Dates in this History’. With wit, she lays bare what many have not stopped to realise: no version of history comes without bias. Societies have valued the doings of the rich and powerful so other lives have gone unrecorded, what a poet writing a few years before Austen called ‘the short and simple annals of the poor.’ He could also have added ‘women’, because their lives were very seldom given the same attention as their power-broking husbands. 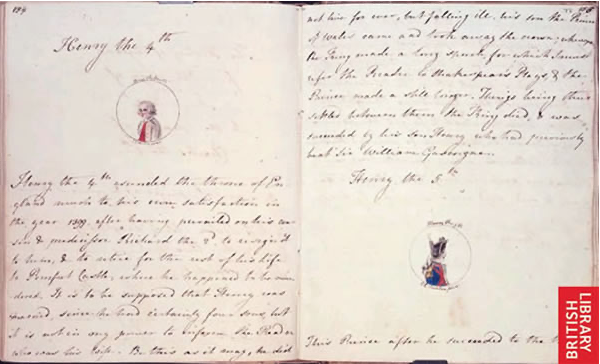 Recent historians, of course, have done brilliant work righting this imbalance. You can no longer write books that present history as ‘just one damn thing after another’ – a quote which in itself contains a microcosm of the problem of history as it has been attributed to many, including usual suspects Mark Twain and Churchill. There are Feminist histories, Black histories, Marxist, Environmental, Economic, Cultural… We are still inventing them as we realise the importance of new perspectives in society. Yet that still leaves us with history that works as an analytical overview and not a lived experience.

This is where historical novels can come in. First is the novel where you really are filling in the blanks. If a novelist does her research thoroughly, she will discover where the imagination has to take over. This is especially true of the distant past. For example, I’ve written about Viking times. The historical record from that period relies heavily on archaeology as the written record is sparse. Once you’ve taken as much of that into account as you can, you are left with great swathes of ‘Here Be Dragons’ in which your story can take place. In this way, it is like a fantasy world where someone else has made up the rules. You abide by the facts but you have a chance to embroider the missing piece, or how the facts are understood. I’ll give you a specific example. Part of my book Wolf Cry involves a voyage to the Arctic Circle in the 9th century, as far north as anyone had gone at that time. That was inspired by an account taken down by a scribe in King Alfred’s court. A Norse traveller and trader, Ohthere, described before the king and his court the lands north of his homestead and the mysterious people who lived there. I loved the idea of such a bold voyage of discovery just to see what was in the lands of the midnight sun. In much greater comfort than Ohthere, I took a fjord cruise to Norway to see some of the places mentioned, researched what I could, and then imagined what that voyage might have been like in the days of the dragon ships.

Then there are the stories that tell the lives that don’t get covered because history is too busy with the machinations of powerful men. My Cat Royal series is trying to be a good example of that. The late eighteenth century is rich in written and visual sources but if you wanted to discover exactly what the life of a young girl of lower classes was like you’d struggle. You can find hints in parish registers, foundling hospitals, criminal trials, background figures in other lives, but not a complete portrait. I wanted to tell that tumultuous period from the point of view of a girl living in the centre of culture – the Theatre Royal Drury Lane – but one who was disadvantaged by the system, having neither money nor parents. That also frees her up to explore her world as she has no respectable ties to weigh her down. In a sense, she is my avatar to run around this world exploring themes such as political cartooning, homelessness, slavery, the French Revolution, Bath, the America of Jefferson, early industrialisation and the cotton factories, pressganging and the navy, theatre in the West Indies, the Haitian slave revolt, piracy… You can see I had a lot of fun with her! These are themes, I argue, best explored from the bottom up rather than top down.

And I’ll offer one final thing that children’s historical novels can do (there are many more) and that is bring untold or neglected history to young readers. In the Tigers in the Tower I have two themes that fit into that category: the experience of mixed race (Anglo-Indian) children in the nineteenth century and the development of scientific thought as regards the treatment of animals. My heroine, Sahira Clive, has a father who is an officer in the East India Company, the commercial body that was the de facto ruler of India at the time, and an Indian noblewoman. The real children of similar marriages in the British Empire faced prejudice both in India and Britain, children of two worlds but not able to find a home in either. This was particularly the case if they were perceived as being darker skinned as racial prejudice was rampant. As she is our heroine, the reader emphasizes with Sahira. She is not the ‘other’ in the story, she is ‘us’. History is reimagined with the outsider being put at the heart.

The scientific story is an example of how historical novels can follow themes for which school curriculums don’t find space. The 1820s saw the beginning in Britain of animal rights. Wilberforce, the great abolitionist, also loved animals. He and like-minded activists established the first animal welfare society in the world in 1824 (what was to become the RSPCA). It prosecuted 63 offenders in that first year. It was a completely revolutionary idea that animals should have legal protection. The same decade saw the movement away from menageries such as the one in the Tower, where animals were regarded as spectacles, to zoos as places of scientific enquiry. The road was bumpy (and arguably still incomplete) but gives a fascinating insight into attitudes. It also intersected with the new science of evolutionary change in this early period, discussions of which can be found in the works of French scientists Cuvier and Lamarck even before Darwin got on the Beagle. They had the idea but were missing the mechanism – natural selection – which was to be Darwin’s big breakthrough.

Returning to Popper, I agree that ‘[t]here is no history of mankind, there are only many histories of all kinds of aspects of human life.’ Historical novels can investigate those aspects and bring them alive for a reader so no one ever again thinks history is just ‘one damn thing after another’.

To read my review of The Tigers in the Tower click here, and be sure to check out other content from additional blog stops on this amazing blog tour – information can be found on the banner below. A huge thank you to Julia Golding for writing this beautiful feature for my blog, and to Lion Hudson for including my blog on this book tour.

I am a primary school librarian and reading advocate. I like to read as much childrens literature as possible so that I can recommend titles to children and adults that would benefit more knowledge on books in order to make an informed choice about what to read next. View all posts by samjdthomas